We're excited to once again share what we've been up to this past month. We have some cool stuff to talk about, so lets dive in:

Over this past month we've been crafting a challenging new boss that Cassidy will face early on in her dreams, "Fear."

We've shown some things off in previous updates, but here's the first look at some new assets and the fight itself! We hope that this teaser for the battle with Fear will get you all excited for the upcoming Beta!

Here we have the level where Fear will exist. The top is Cassidy's dream of her hometown's main street before it's flooded and infiltrated with dark thoughts.

There's still more revisions and goodies to come, but we'll save that for another update.

We've made a lot of progress in on the waking world side of things. Before we do a little show and tell, we wanted to give a reminder of what you all should expect. For more info, check out our last post!

For us, the primary goals of the Waking World gameplay are to layer rich story-telling onto our nonlinear core loop and add meaningful persistence and progression to our game.

We feel that coupling those goals with the combat and exploration in Cassidy's dreams will create a much richer and well-rounded experience. That said, we want to make sure that we're not frustrating any fans of traditional Roguelite gameplay, so we've put in place constraints for our Waking World designs. All Waking gameplay therefore must be both low friction and optional.

Players will be able to move through real world spaces to interact with people across Red Haven. 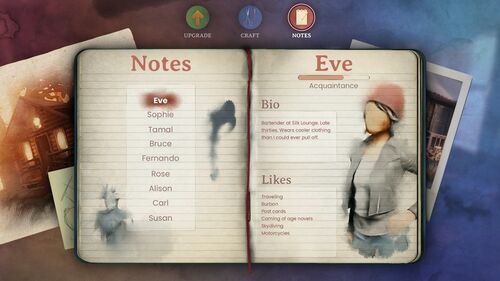 You can expect to access most of the menus in the Waking World via Cassidy's dream journal (which can be brought up anywhere). You'll find sections that contain notes on characters she's met, upgrades you can acquire and art that you can create to deeper bonds with your friends. 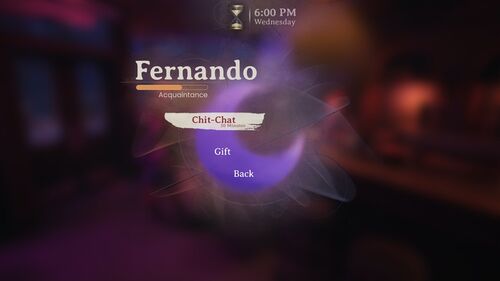 When interacting with characters in the Waking World, Cassidy will have the choice of chatting with them or giving them a gift.

The conversations Cassidy has while chatting with a character influence the elements that will wind up in her dream - things like weapons, abilities and items.

Giving someone a gift will help forge friendships between Cassidy and that character. As that bond deepens, both Cassidy and the person she's talking with will reveal more details about their life and personality.

As we approach December we wanted to give you a very candid update on our development progress and to share some news with all of you.

As you may know, we have worked tirelessly over the last three months preparing for our closed Beta. What you probably don't know is that in parallel we have begun a handful of other efforts that we believe are critical to the long-term success of Dreamscaper.

We have collectively decided to push out our Beta until January at the earliest. We hope you understand that we pride ourselves in our work, and we don't feel comfortable rushing to release a Beta build of our game that doesn't meet our own quality bar.

As for our launch, we previously listed February 2020 as our target release date. Frankly, we originally chose this date because it was when we would run out of rent money. Fortunately, through your support (and some sacrifices we've personally chosen to make), we will be able to release a version of Dreamscaper with much more content if we change our target window to "Early 2020".