A little over two years ago the three of us took a big risk - we left our job and decided to strike out on our own. A short year later we reached out for help when we launched this Kickstarter and all of you amazing people supported us and encouraged our development - we are truly so thankful!

Fast forward another year and today a personal dream of ours is coming true. We're so happy to be able to share this with all of you and can't wait for you to get a chance to play. 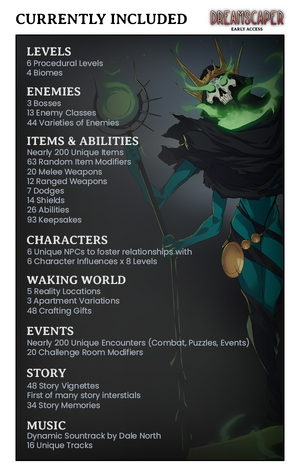 As you can see, there's A LOT of content already in Dreamscaper. We're quite proud of the scope and quality of Dreamscaper at Early Access. It was important for us that our Early Access release feel like a full game, so you all can enjoy a complete experience from start to finish, even as we add more content and story moments.

We plan to be in Early Access for between six months and a year. During that time, we plan on releasing many, frequent updates that will expand the content, world and story of Dreamscaper.

Along with new levels and a plethora of new weapons, abilities and items, the full release of Dreamscaper will expand the depth of the story and interconnected nature of the waking world and dreaming world.