Thank you for all the support as we wrapped up the campaign. This past month we dove right back in to production. Going forward, we'll keep you all informed with monthly updates.

So, what have we been up to since the campaign ended?

We've sent out all backer surveys! Please fill these out when you have a moment, we want to make sure we can get your rewards to you as quickly as possible when we launch next year.

For those of you who are designing an element of Dreamscaper - we've also sent out information to you directly. The sooner you get your ideas to us, the better, so we can make something awesome together!

Our big focus now is to get a solid slice of the waking world gameplay into your hands by the December Beta.

Our Engineer, Rob, has been hard at work building out all the components for this system. What you can expect:

New real world UI in the form of a dream journal Crafting - Cassidy uses her artistic talents to make gifts for her friends Relationship Progression - spend time with various characters to learn more about them and about Cassidy. Spending time with characters unlocks new items and abilities you can take into your dreams. Spend your time wisely - time in the waking world is your number one resource. You'll have a variety of things you can do, and you'll have to make decisions about where you want to spend your time. Story vignettes - this includes vignettes with specific characters, and a full story for Cassidy outside of the dreams that parallels them (we're trying to keep it hush-hush for now).

Paul has begun putting together a multitude of locations that Cassidy can explore. Here are some brand new locations: 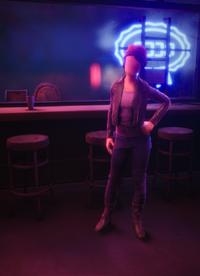 She’s a good listener, enjoys people and makes fast friends. A traveler with a persistent wanderlust, her life is fashioned around her independence and freedom. Now that she’s fast-approaching her 40s, worry about her future has begun to seep into her life. Her job as a bartender allows her the freedom she values so highly, but her concerns for the future are taking a toll.

Ian is currently working on bringing Fear to life - its movement, attacks and patterns. Look for this guy in the December Beta!

As we've mentioned before, we're committed to bringing you a rich story about Cassidy and her struggles. Quite frankly, we didn't have the right DNA in the team to give the story the attention and the thoughtfulness it needed.

To round out the team, we put out a call on twitter for a contract writer and the response was overwhelming! We had so many amazing applicants that were very excited and passionate about our project.

So, thanks to all of you, we were able to hire Kathy E. Jones to help flesh out character backstories, and write the vignettes between characters.

We'll have a sampling of character interactions and story in future updates!